From the Koʻolau Mountains to Haunama Bay, Hawaiʻi is known for its many beauties. While the islands’ lush landscapes offer its beholders wonderful sights, the spaces and those that dwell within them hold stories that are integral to Hawaiʻi’s biodiversity and the notion of  mālama ʻāina (to care for the land and its resources). Join us as we discuss five (of many) different species of flora and one root vegetable that are indigenous to/can be found in Hawaiʻi. 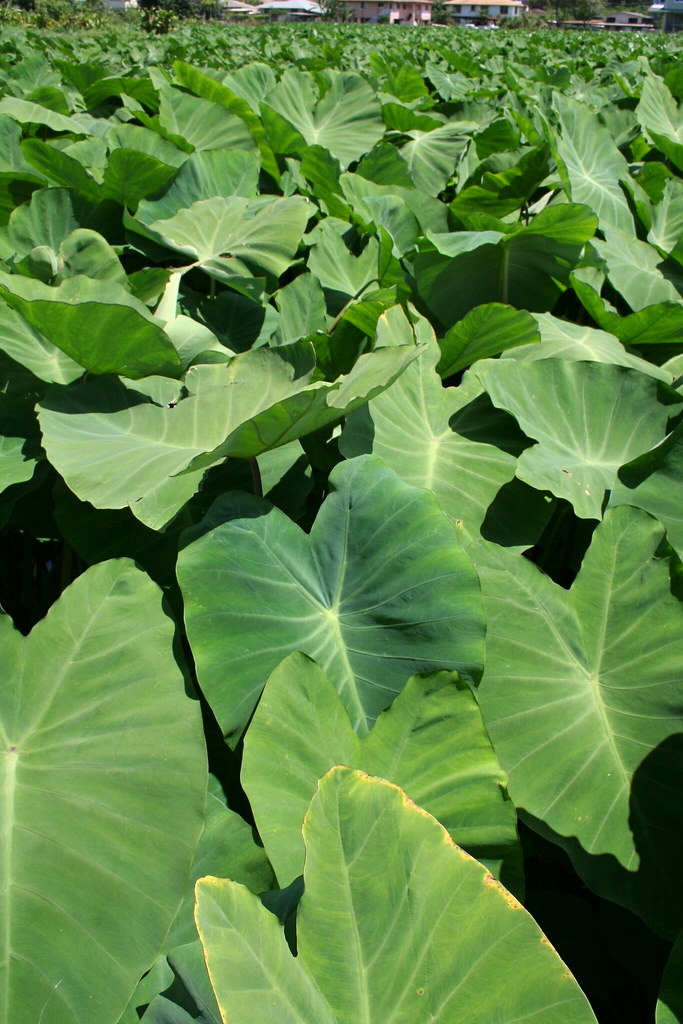 Photo: "Taro patch" by christopherhu on Creative Commons (CC by 2.0). No changes or alterations were made.

According to Hoʻokuaʻāina, kalo, or taro, is a root vegetable and “one of the most complex carbohydrates on the planet.” Kalo is grown in a loʻi (taro field) and commonly used to make poi. In a report by the College of Tropical Agriculture and Human Resources (CTAHR) at the University of Hawaiʻi at Mānoa, kalo corm contains potassium and fiber, and can become a good source of calcium and iron when eaten regularly; if consumed as a vegetable, kalo also provides vitamins B1, B2, and C. One must steam or boil kalo before consumption, as kalo in its raw form is poisonous.

Along with its health benefits, kalo has a significant place in Hawaiian culture. As mentioned by the CTAHR, legend says the kalo plant grew from the body of Hāloanaka, the first child of the godbeings Wākea and Papa, who created the island chain. Hāloa, their second child, is who the Hawaiian people descended from, as he became the first human to live in the islands. Because kalo came from Hāloanaka, the firstborn, it is “superior to and more sacred than man.” Hāloa respected and cared for his older brother and received sustenance in return through the kalo. 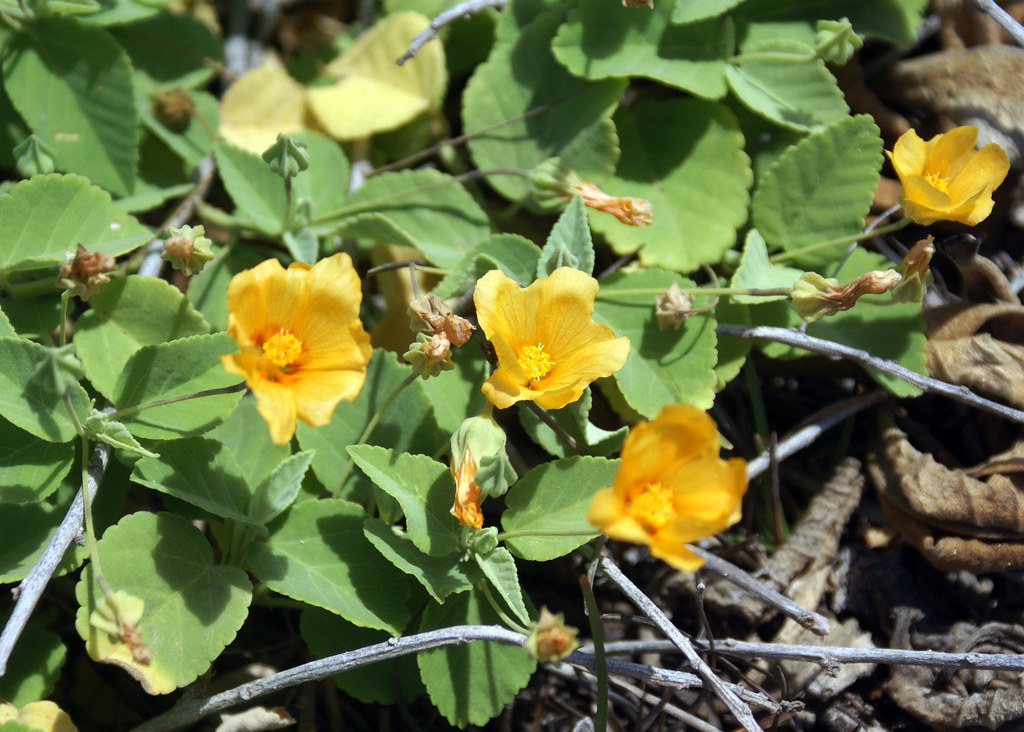 "Maha'ulepu Trail--Ilima Flowers" by Makuahine Pa'i Ki'i on Creative Commons (CC by 2.0). No changes or alterations were made.

As detailed by Hui Kū Maoli Ola, ’ilima is an indigenous plant and the island flower of Oʻahu. The ’ilima shrub can be found both on the coasts and in forests throughout the island chain. One of the many varieties of  ’ilima, known as ‘ilima papa, grows to be up to a foot tall, and others can reach four to six feet. While the ‘ilima flower is used to make lei, it is also edible and can be used as a mild laxative for babies. Flower Leis further details that the flower has no scent and is known for its yellow color. ’Ilima flowers represent good luck and are considered a sacred flower to Laka, the goddess of hula.

Mana Artisan Botanicals mentions that Laka, which means “gentle” or “to attract,” is said to have created hula on Moloka’i, while other mythology say that Hiʻiakaikapoliopele, sister of Pele, the Volcano Goddess, learned hula from Hopoe, “The Dancing Stone.” Laka has an ancient heiau (Hawaiian temple) dedicated to her on Kauaʻi, and is also considered to be the goddess of the forest. Also known as jasmine, the pīkake flower is regarded for its beautiful fragrance and used in lei. According to the Hawaiian Lei Company, the flower received its name from the niece of King Kalākaua and Queen Liliʻuokalani, Princess Kaʻiulani, who was inspired by the peacocks that lived in her garden. They also say a pīkake lei is “a familiar part of the old courtship ritual and is a sure way to a woman’s heart.” The scent of pīkake has been used in soaps and its blossom’s beauty is captured in various items and products, such as Laha'ole Designs’s Pīkake Lei Microfiber Towels and Pīkake Hoops. 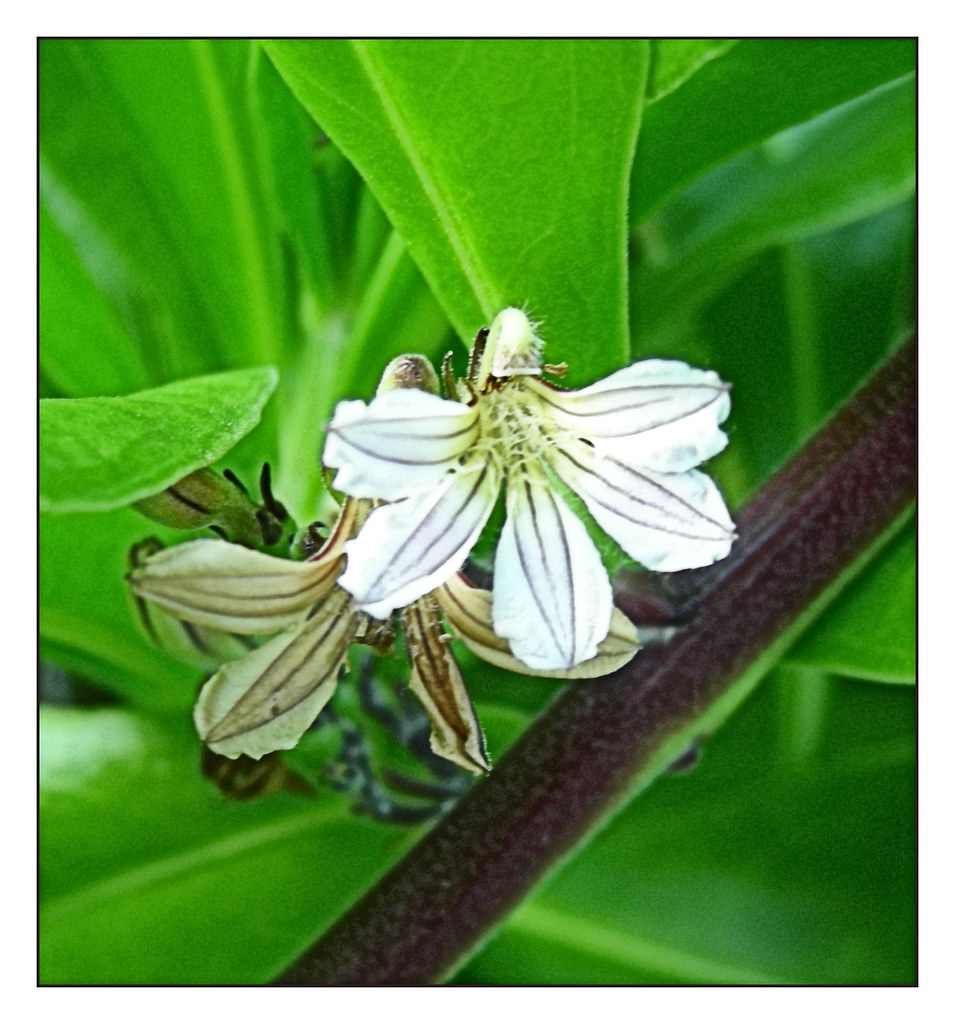 "naupaka" by eye of einstein on Creative Commons (CC BY 2.0). No changes or alterations were made.

Noted for the unique way its flower blooms, the naupaka shrub is an indigenous plant that grows throughout the island chain. According to Hui Kū Maoli Ola, there are nine species of naupaka, two that grow along the coast, and seven that can be found in the mountains. Some varieties include Naupaka Kuahiwi (Mountain Naupaka), which is endemic to all of Hawaiʻi except Niʻihau and Kahoʻolawe and used to make lei, Naupaka Kahakai, which grows on almost every sandy or rocky beach, and Naupaka Papa, which is endangered. Although each naupaka variety has different flower and fruit colors, all grow with five petals in the shape of half of a flower.

The shape of naupaka is connected to the legend of Princess Naupaka. Princess Naupaka fell in love with a commoner named Kauʻi, who was a fisherman. Because love between royalty and commoners was forbidden during ancient times, Naupaka and Kauʻi could not be together. The princess was banished to the mountains, and Kauʻi was forced to live by the ocean. According to the website Hawaiian Words, the naupaka shrubs witnessed the lovers’ grief and began to bloom in halves to memorialize their connection. When two naupaka flowers are placed together, they form a perfect flower. Some say that if you were to pick a naupaka flower from the coast and bring it to the mountain (or vice versa), it would die before you reach your destination. As stated by Hui Kū Maoli Ola, the kupukupu fern is indigenous to Hawaiʻi. With at least five different species, only two are native; the other three are invasive and can hybridize with the native species. The kupukupu fern is also used to decorate hula altars to signify “...a place of learning, or sprouting knowledge…” According to a report by the CTAHR’s Department of Tropical Plant and Soil Sciences, the fern is one of the first plants to be found in lava fields and can grow in various soil conditions and in full sun or partial shade. 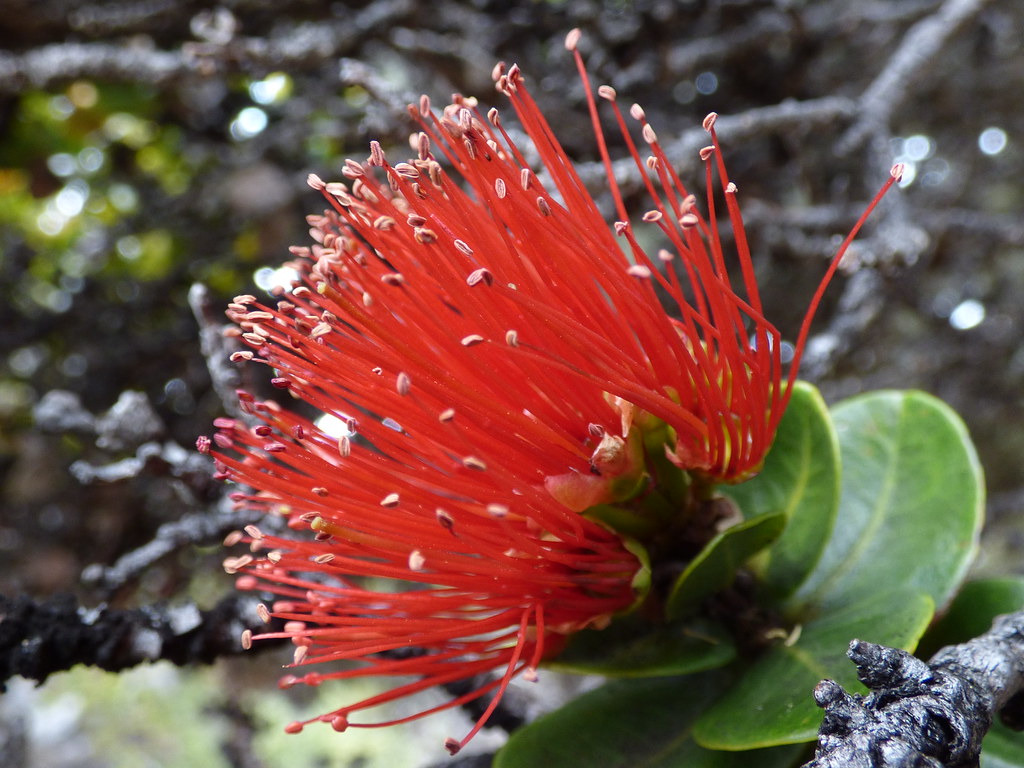 "Ohia Flower - Kahikinui Forest Reserve" by Forest & Kim on Creative Commons (CC BY 2.0). No changes or alterations were made.

An endemic plant to all islands except Niʻihau and Kahoʻolawe, the ʻōhiʻa plant is mainly found in higher elevations, as stated by Hui Kū Maoli Ola. The ʻōhiʻa is known for its flowers, which come in a variety of colorways including dark red, called lehua ‘apane and yellow, lehua mamo. The ʻōhiʻa tree is important in Hawaiian culture and was used for house construction, posts, rafters and gunwales; its lehua blossoms were used to make lei and decorate hula altars dedicated to the god Kuka’ohi’a.

The ʻōhiʻa lehua is associated with Pele, the Volcano Goddess. As noted by Love Big Island, the goddess met ʻŌhiʻa, a handsome warrior, and asked to marry him. ʻŌhiʻa refused, as he already pledged his love to a woman named Lehua. In response, Pele turned ʻŌhiʻa into a tree. The gods saw how heartbroken Lehua was, and turned her into the lehua blossom so they could be together forever.

Although a loved plant, the ʻōhiʻa is in danger. According to the Hawaii Invasive Species Council, the fungal pathogen known as Rapid ʻŌhiʻa Death (ROD) was identified on Hawaiʻi Island in 2014. Rapid ʻŌhiʻa Death, which has two species known as ROD canker disease and ROD wilt disease, lead to tree mortality. As stated by CTAHR, a few ways to prevent the spread of ROD include cleaning all gear and tools before and after entering forests, and avoiding transporting ʻōhiʻa inter-island. Many groups such as the ʻŌhiʻa Legacy Initiative seek to increase knowledge of the plant and other native species and establish the ʻōhiʻa tree “as a common feature in both residential and public areas of Hawaiʻi.” For updates on events and new releases